Let in the Light

The Gayatri Mantra is a universal prayer, and is considered as one of the most important and powerful Vedic mantras. A powerful mantra for inner light, healing and transformation. It sharpens our intellect, calms the mind and illuminates our inner being so that we connect more potently to our inner teacher.

In this workshop, you’ll learn to chant the Gayatri Mantra, we will infuse it into our 2 hour practice lead by Fi. The practice consists of Asana, Yoga Nidra, Pranayama, Meditation and Contemplation. Remembering our light is endless and already exists within us, harnessing this we can powerfully honour who we are, and embrace who we are meant to be. 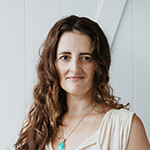 Fiona has always been passionate about the way the body moves and connects, and as a professional dancer it was the physical element of the practice that originally drew her to yoga. Right at the peak of career, her practice became a sanctuary for healing, self-inquiry and transformation. After traveling the globe Fiona returned to Australia in 2009. She managed her own business called Livelyhood for 6 years, and became involved with Red Dust Role Models – a health promotion organisation that delivers health living programs to some of Australia’s most remote communities.

Fiona began her teacher training with Power Living in 2014 (Duncan Peak and Keenan Crisp). She has since continued to train with Power Living in Advanced Assisting (Adam Whiting), Sarah Powers in Yin/Yang Yoga and Mindfulness Meditation, Maty Ezraty, Trauma-informed Yoga wit the Yoga Impact Charity, and is currently studying with Parayoga under her teachers Yogarupa (Rod Stryker) and Brad Hay.