Do you want to deepen your understanding of yoga? Are you thinking about becoming a yoga teacher? Power Living’s 200hr Yoga Teacher Training isn’t just for aspiring teachers, it’s for anyone with a curious spirit looking to transform their life!

Wondering if it’s right for you? Have questions? Join us at our next Teacher Training Info Session. We’ll kick things off with a rocking Vinyasa class so you can experience first-hand the power of the practice, then jump into the info session where we’ll explore the nitty gritty and what you’ll really get from the program.

Yoga is so much more than a series of poses. We elevate and accelerate our students to teach authentically, grow, build communities and transform lives, starting with their own. Power Living’s Yoga Teacher Training is a transformational journey that will challenge you and change your life! 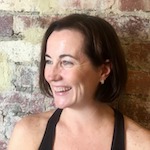 Claire found yoga soon after having her first child about 9 years ago. Initially it was for regaining physical strength and yoga provided the space and time for herself that is quite uncommon in early parenthood.Years later in 2016, she started daydreaming about becoming a teacher, inspired by the impact her practice was having on her and encouraged by her teachers.  She started practicing vinyasa and was transported to another realm by the pranayama and asana flow, all the while transforming her thinking through the philosophy.  With the support, love and faith of her beloved husband, she took the leap to become a teacher completing the 200hr certification with Power Living in 2016. She is currently on her pathway to 500hr certification. From her classes you can expect her playful, enthusiastic and authentic self. She laughs at herself often, especially when she makes mistakes and is an open expression of a masterwork in progress! She also believes that you are accountable for your own energy and experience.