Are you ready to take on the 30-Day Challenge?

This transformational program focuses on yoga asana, meditation, nutrition, and self-enquiry over four weeks. Each week we’ll build on the learnings from the previous one, set new habits, break old ones and rewire your brain into more positive patterns so you can live your most fulfilled life and become the best person, partner, parent or friend you can be.

Healthy eating with a gentle cleanse

Final Groove Party will be 28 February – where you get to acknowledge and celebrate all you’ve achieved.

Join us and commit 30 days to YOU – go from zero to hero as you make modern yoga a way of life. A commitment for 30 days for benefits that can last a lifetime! Ask yourself, what’s possible…? 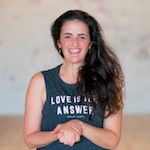 Fiona has always been passionate about the way the body moves and connects, and as a professional dancer it was the physical element of the practice that originally drew her to yoga. Right at the peak of career, her practice became a sanctuary for healing, self-inquiry and transformation.

After traveling the globe Fiona returned to Australia in 2009. She managed her own business called Livelyhood for 6 years, and became involved with Red Dust Role Models – a health promotion organisation that delivers health living programs to some of Australia’s most remote communities.

Fiona began her teacher training with Power Living in 2014 (Duncan Peak and Keenan Crisp) , She has since continued to train with Power Living in Advanced Assisting (Adam Whiting), Sarah Powers in Yin/Yang Yoga and Mindfulness Meditation, Maty Ezraty and is currently studying with Yogarupa Rod Styker.